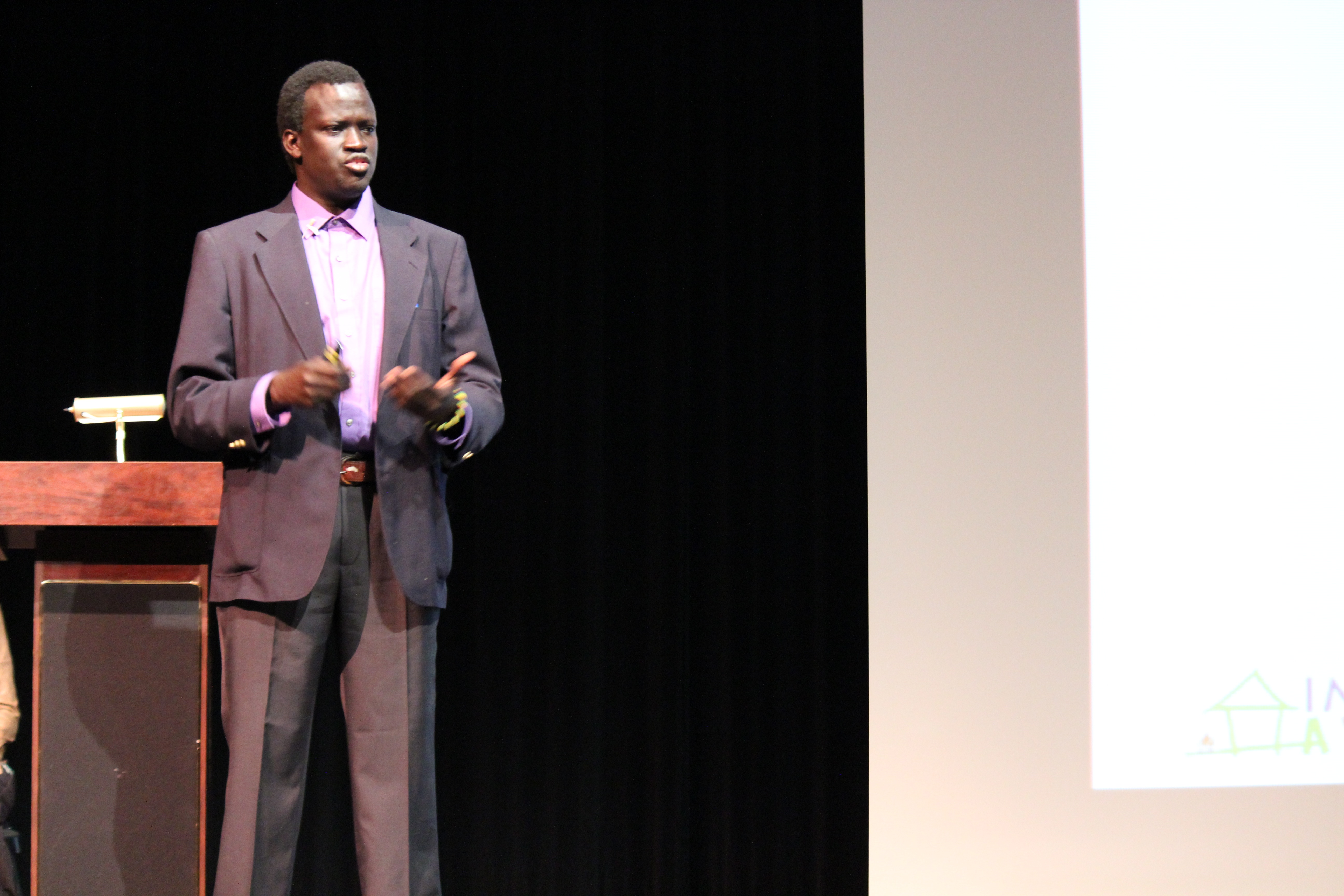 At the tender age of five, most children are learning how to spell their name, with no worries in the world. But that was not the case for Deng Ajak Jongkuch, one of the “Lost Boys of Sudan.” He was forced to flee his village without any guidance, and had to grow up in very poor conditions before getting the chance to move to America and receive a better chance at life.

Deng is from South Sudan, Africa; a country in the midst of its second civil war in 1983, when Deng was just a young boy. The government defeated the rebels but pushed them into the villages. Many of the villagers didn’t know anything about politics, including Deng’s mother who was illiterate. As a result, thousands of people escaped in order to avoid being shot from rebels or the military. Deng, like thousands of other children his age, lost his parents in the crowd and didn’t know where to go. Going back to his village was not an option, as it was unsafe to return. So Deng started his three week journey with thousands of other children to Ethiopia, many of whom lost their lives and couldn’t make it to their final destination

“United Nations did not want to help because they thought we were war soldiers. Soldiers who were five years old?” said Deng, who told his story to CVHS students on March 19.

Soon after they reached Ethiopia, they were kicked out as a result of a military coup. They had two options: stay and risk being shot, or flee the area once again with no clear plan of survival. Many made a getaway towards a nearby river but sadly, a few drowned and died. Those who made it, relocated to Kenya; this journey took them over a year by foot, as they trecked through dangerously mysterious jungles and ate whatever edible fruits or animals that came into sight.

“No shoes, no water, no blanket. You cannot imagine that,” Deng said.

When asked why he kept moving on, and not giving up, his answer was simple, “The fear of dying.”

They eventually reached the Kakuma Refugee camp in Kenya. By now, many people had either died from the journey or were abducted by rebels. At this time, the UN had gotten involved providing food and water. To the children’s dismay, there was only enough food to last them a few weeks. So in order to survive on what they had, they split into groups rationing the food among them so that only one group would eat one meal each day. It wasn’t enough to survive in a healthy way, but was still more than what they were used to for the past year.

“Can you only eat one meal a day?” Deng asked the stunned audience. “But we got used to it because it was all we were given.”

In Kenya, he started his first grade education using the sand as a place to do his arithmetic and practice his writing skills. It wasn’t until he was in the fourth grade that he received a pencil. After completing his high school education, the United States decided to help some of the children and take them to America to give them a better opportunity in life. There were seven interviews conducted to determine who would get to leave their terrible conditions. The first interview was done to identify their background; most did not know their birth date, so they were given one. Deng was given Jan. 1, 1981 as his date of birth. In fact, most people were given Jan. 1 because it was the first day of the year.

Those accepted were excited to come to the U.S. Small things like stoves, the showers, lights and vacuums fascinated them, they had never had these resources. After three months of being trained in the American culture, they were sent off to be on their own. He had his first job at Pottery Barn Kids lifting large supplies which he found difficult and often felt frustrated when he could not understand his co-workers. After three years of working there, he was found it hard to pay his bills so he decided to go for higher education.

He attended De Anza college in Cupertino where he did well in math and science but had trouble with english and all the essays he was required to write. He graduated in 2008 in Health and Administration and later attended San Jose State University where he did his masters in Public Administration.

“It was still difficult, but that does not mean it can’t be done,” said an optimistic Deng.

He decided to go back to South Sudan, but there were no cell phones, no internet, no facebook to help him find and contact his family. Eventually he introduced himself to a family, but no one recognized him because he had nice clothes and shoes, which was unusual for the people in Sudan. The woman he thought was his mother couldn’t see his face properly, so she took some dry grass, lit it on fire and held it to his face. She couldn’t believe it was him, so she asked him what his nickname was and he replied, “Little Pumpkin.” The villagers started crying because they realized it was actually him and got excited, asking if he still remembered them. Deng was the first person during that time to revisit the village, so he had to tell other families what had happened to their children. Some had died or were in refugee camps, but others managed to make it to America.

He discovered there was a 90 percent illiteracy rate and that there were no roads or clean water around his village. After returning to America and giving a presentation of his trip to his class in SJSU, someone asked him what he was going to do to change fix that. He did not know at the time so people donated money and he raised $20. Seeing this as an incentive, he kept doing more presentations until he raised $4,000. He went to Kenya and bought some necessities for the people in his village. After realizing how beneficial his help was, he gave another presentation at SJSU to get more money to build a school. After teaming up with Lisa Wade and the non-profit organization Impact A Village, they raised $25,000 in one year to build the new school.

“If people are educated, they are less likely to support the war. Education starts with young children,” Deng advised.