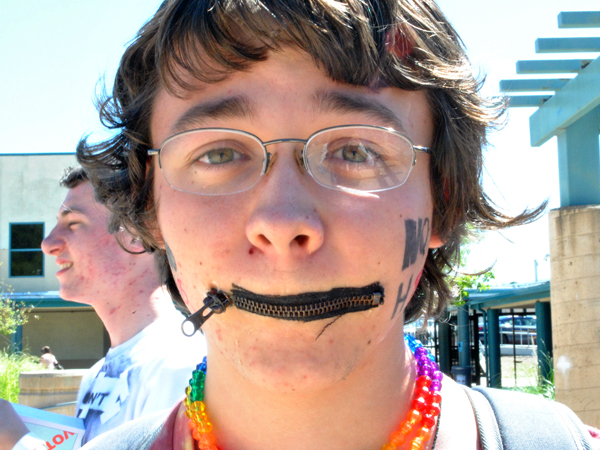 Students may have seen people sporting red or tie-dyed clothing, writing on notepads, and, when you went to say “hello,” waving instead of saying “hi” on April 20.  These people did not accidentally lose their voices; they were participating in Day of Silence.

Day of Silence is an international event when people refrain from talking for a whole day in order to raise awareness about the issues in the LGBTQ community and share the burden of the voiceless.

“It’s about supporting people that are too afraid to express themselves,” said sophomore Nadia Finkelman, who participated in Day of Silence.

Junior participant Laura Miller hopes that “we can educate people further on the lack of rights allowed for LGBTQ by drawing attention to the problem.”

The students participating in the event were silent all day and met in the courtyard during lunch to share a silent meal.  After school, they reconvened in the courtyard to break their silence together.

“I feel it’s important to get the message out strongly without having to actually say anything,” said senior participant Zachary Peterson.

Remaining silent for a day can be difficult, but senior and Spectrum Vice President Kaitlyn Goode commented that it is “frustrating, but not hard.”

This year’s Day of Silence had a small decline in the number of participants due to other events happening on April 20 such as Kony 2012.

The motivation, however, was still strong.  Senior and Spectrum President, Justin McLean, used latex to attach a zipper across his mouth this year to emphasize Day of Silence.

McLean has been participating in Day of Silence for six years.  At first, it was hard for McLean to keep silent but after being bullied in high school for hurtful assumptions, keeping silent has since become a “piece of cake.”  To those who are hesitant about participating, he encourages them to “give it a try: be silent for an hour or half a day.  Show some level of support.”

While spreading awareness about LGBTQ issues was the main focus, there were some minor benefits too.  For example, the best part of Day of Silence for sophomore Ben Irvin was “not answering questions in class.”