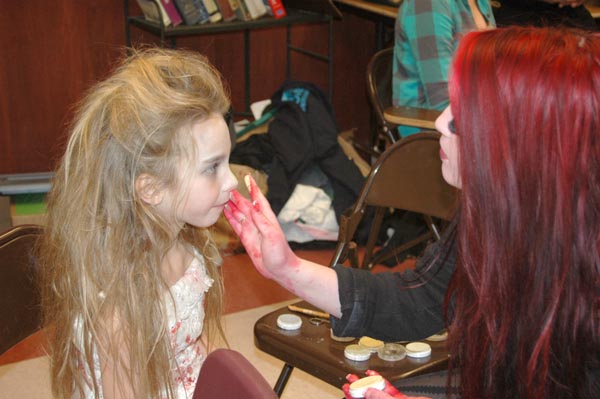 Flesh-eating zombies, hungry for human brains, haunted the Center for the Arts during the American Sign Language classes’ production of “Zombie High, A Night to Remember,” as shrieks and screams flooded the auditorium. American Sign Language students of all levels put their time and effort into the creation since December of last year. ASL teacher Ovida de Julia directed the play, along with senior and ASL Honors student, Shira Laux as student director.

“The cast is mostly made up of the older students but a lot of ASL 1 and 2 students have helped out a lot,” said ASL Honors student and senior Laura Munder. The performance consisted of students signing along with a voice over so everyone, whether deaf or hearing could enjoy.

“The main point of the performance was to show everyone that deaf people have their own culture and language and it’s something they can never forget. Deaf people are perfectly happy with the life they live,” said de Julia.

One of the main characters played by senior Jason Phillips expressed, in one scene, the fact that although the zombies and him suddenly regained the ability to hear, he still continued to utilize sign language and re-instill the unique culture back into the lives of the zombies.

The show was written by de Julia’s husband and was then tweaked by the students. The show premiered on Feb. 25 and was performed four times throughout the weekend.

“Opening night was a blast, very nerve racking but when we all got on stage, it was a blast,” said junior Janeiro Golson. This year, the show’s theme was “Zombie Prom,” so of course, zombies wearing shredded prom dresses and tuxedos were seen dragging humans off the stage and being turned into zombies.

Although this was a show about zombies and their craving for human souls, the students also managed to include a comedy component and incorporate common prom-related high school dilemmas. However, “at the same time we all agree that we want our audience members to leave with a new perspective on deafness and sign language,” said Laux.

The production entertained its audience by signing and dancing to popular songs such as “Billionaire” by Travie McCoy and even older songs such as “Thriller” by Michael Jackson.

The show ended with the humans and zombies coming to a compromise and dancing to “One Tribe” by Black Eyed Peas.

“I loved the outcome of our show, I think it was better than our shows in the past,” said Golson