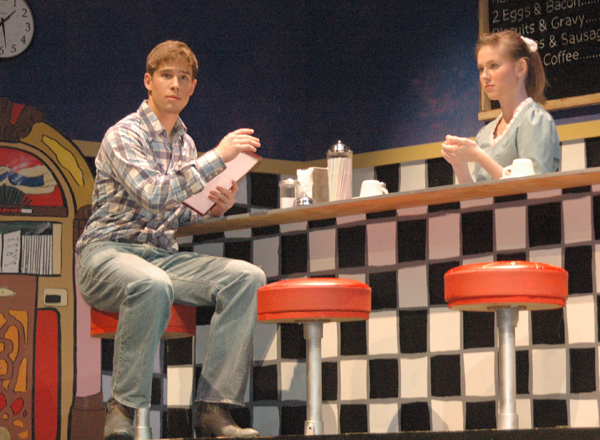 It featured many CVHS students, both as actors and as production workers.

Bus Stop is a drama about a young couple who learns about love and their relationship as they wait in Grace’s Diner during a 1955 snowstorm.

Filled with comedy, romance, and suspense, this play introduces a variety of relationships as stranded bus passengers take shelter in the diner in Kansas.

Although the play takes place in one setting for the whole show, the characters face drama, tragedy, friendships, and love throughout the show.

Bo Decker, one of the main characters, is a “crazy non-Southern cowboy from Montana,” said by senior Trevor Macabe who played the character.

Decker is a young man who has no knowledge on girls and relationships, although he acts like it. He kidnaps and forces Cherie, a night club singer double casted by senior, Vesselina Ivanova and Julia Cornelius, to marry him.

Through trial and error, Decker slowly learns what love truly is and realizes that he cannot force love.

Cherie, on the other hand is a hard working girl with a difficult past who faces men who want her everyday.

She wants to be respected and wants to fall in love, but is not sure love exists because she had only heard of the sort of love in fairy tales. Despite their differences, the pair learns not only about each other but about themselves and their belief of what love is.

Each performer on stage successfully presented their characters well and portrayed the message each character is supposed to give.

Davidson says that the character he played is different from him but he can relate to him.

“Dr. Lymen deals with struggles that all of us do at one point or another,” says Davidson.

Through Dr. Lymen’s experience, Bus Stop portrays a message that what one wants may not be the best for one’s self.

“The cast is small and everyone is so close to each other so I feel at home. We’re like family,” said Ivanova, an experienced musical theatre performer, as she expressed her love for the play and the cast.

Macabe, on the other hand, never had any theatre experience and Bus Stop was his first play.

“I’ve never been in any plays, but the directorial staff constantly begged me to play the main character and I gave in,” jokes Macabe. “The best part about being in Bus Stop is making the crowd laugh and of course, the hip thrusting.”