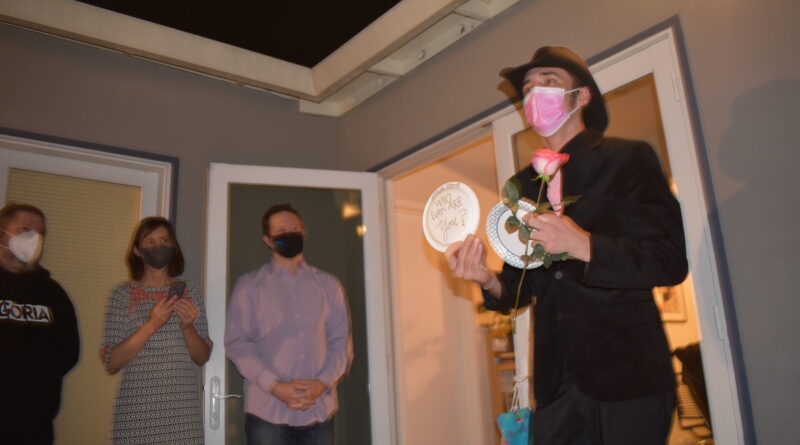 “A Very Cubed World” is a short film shot, acted, and edited almost completely by CVHS students. The mind behind the film is CVHS senior Zac Furber-Dobson who acted, directed, and wrote the short. Senior Atticus Spence and sophomore Sophia Pereira lend their acting talents to produce some haunting and extremely entertaining performances. Matthew Erickson, Martín Martínez Gonzalez, Logan Phulps, and Joseph Sodano are all CVHS students who worked on the project as crewmembers.

Viewers from Castro Valley will recognize many of the locations in the film like the Castro Valley Community Center, Parsons Park, or even the Castro Valley Rite Aid. “A Very Cubed World” premiered on a red carpet on Saturday, Jan. 15 to a select audience of friends and family that I was privileged to attend along with the cast and crew.

“It was really my inspiration from some of my favorite films like the sunken place specifically in ‘Get Out,’ ‘Hereditary,’ and some David Lynch films such as ‘Eraserhead’ and ‘Mulholland Drive,’” said the director Furber-Dobson.

“I tried to make a movie that is left to the viewer’s own interpretation. It blurs the line between coherent stories and different genres and styles. This ‘abstraction’ is where I believe creativity flourishes,” Furber-Dobson.

The film itself almost eludes description but can be loosely called a comedic psychological thriller, not dissimilar to many “Adult Swim” shorts. Giving an unbiased description of the actual plot is a difficult task. It is left to the viewer’s own interpretation.

The nine-minute picture is made up almost entirely of conversations between the three characters. It was shot completely on a phone camera and is an exploration of filmmaking style that is very obviously a passion project from all those involved.

“We had two days of shooting and a couple more for reshoots later on,” said cast member Sophia Pereira.

“The editing process took about a month and a half,” Furber-Dobson mentioned.

“The time that was spent in between not performing in a school play was very lonesome and boring so I decided to curate this project to keep me occupied,” Furber-Dobson explained when asked how this story began. It all started as a simple improv scene that grew into the eventual final product.

“Zac was a very good director and I had fun messing around with the cast,” said crewmember Joseph Sodano.

“A Very Cubed World” can be found on Furber-Dobson’s youtube channel, “Grudgeattic” right now and is very worth your click and ten minutes of your time.

10 thoughts on “Be there or be square, watch “A Very Cubed World””