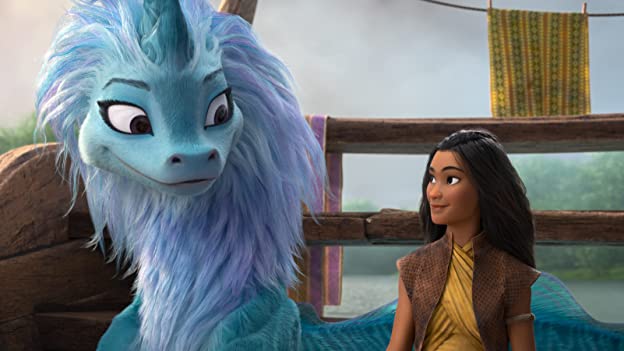 Disney animation studios “Raya and the Last Dragon,” recently released on Disney Plus for a fee, is Disney’s latest attempt to continue its run of successful animated films. 2020 was a great year for Disney animated films, as Pixar released two films on Disney Plus that were nominated for Best Animated Picture. “Raya and the Last Dragon” tries to continue that trend, albeit with a different studio.

“Raya and the Last Dragon,” co-directed by Don Hall and Carlos López Estrada, follows Raya (voiced by Kelly Marie Tran) as she tries to save the world from Druun, evil creatures who turn people to stone. To do so, she must obtain all five pieces of a dragon orb and put them together with the help of the dragon Sisu (voiced by Awkwafina).

Let’s start with the positives. The film is beautifully animated, as Disney’s animation seems to be getting better year after year. The score by James Newton Howard is also great and really captures the emotions the film is trying to portray.

But when it comes to major positives in the film, that is about it. All of the problems that the rest of the film has can be traced back to poor pacing and a lack of understanding of the time needed to tell a story of this size.

“Raya and the Last Dragon” has a story more akin to “Lord of the Rings” than “Frozen.” That’s not necessarily the problem, as Disney has had success recently with action epics (see: “Avengers: Endgame”).

The problem is that “Raya and the Last Dragon” has the runtime of “Frozen.” The relatively short runtime doesn’t give this story enough time to fully develop. The film speeds through the beginning at a lightning quick rate, not giving much time for development of any of the characters or any of the tribes as a whole. When the catalyst event takes place, it falls flat because you don’t understand the characters except for Raya. The pace continues to be lighting quick as the film progresses, and the characters we meet along the way suffer from lack of real development.

As the film reaches the climax, you can’t help but feel disappointed because you don’t know or understand very many of the characters besides Raya. The only character that Raya has a real relationship with in the film is her giant pet hedgehog. There are not very many films that I would recommend adding an hour to the runtime, but this film needs it to give its story the care it deserves.

All in all, I admire the film’s ambition, as it was trying to tell an epic story. But the execution leaves a lot to be desired. If you have Disney Plus, I would recommend watching “Moana” again instead of spending $30 on “Raya and the Last Dragon.”