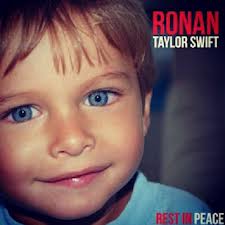 Taylor Swift has always been one of my favorite artists from her first hit “Our Song.” Throughout her career, Swift has written countless songs about heartbreaks from her song “Back to December” to “Teardrops on My Guitar,” but her new single “Ronan” is about a little boy with a heartbreaking story.

Swift performed “Ronan” on Sept. 7 at the Stand Up Against Cancer 2012 Telethon as a tribute to Ronan Thompson. Ronan Thompson passed away three days before his fourth birthday on May 9 due to neuroblastoma, a fatal child cancer.

Swift, like many others, was touched by Ronan’s inspirational story that was originally blogged about by his mother Maya Thompson. Maya Thompson started her blog “Rockstar Ronan” when Ronan was first diagnosed. Her initial purpose was to keep families and friends updated, but soon the blog got thousands of followers, Swift among them.

The lyrics in the song, “Flowers pile up in the worst way, no one knows what to say,  about a beautiful boy who died, and it’s about to be Halloween,  you could be anything  you wanted, if you were still here,  I remember the last day,  when I kissed your face,  I whispered in your ear,  come on baby with me,  we’re gonna fly away from here, you were my best four years,” were all taken from Thompson’s blog. Thompson couldn’t believe how well Swift accounted the small details from her blog into a beautiful, breathtaking song.

The song had a huge impact on the crowd, particularly when Swift was sang along with a picture of Ronan in the background. Anyone hearing “Ronan” can feel the family’s pain. I recommend anyone, a Taylor Swift fan or not, to listen to this wonderful record.