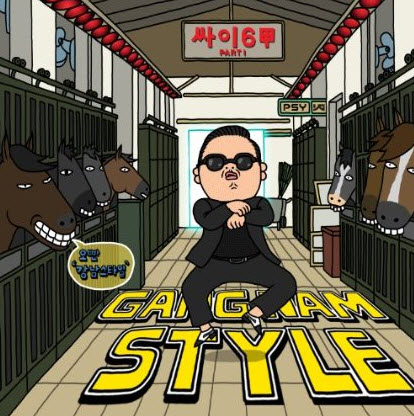 Entertainment Music Reviews
October 9, 2012June 18, 2013 Eva Chen 1 Comment catchy, energetic, gangnam, korean, pop, popular, PSY, style, upbeat
An infectious tune filled my car as I rushed through traffic to make it to my class one morning. But what really caught my attention from the tune were the Korean lyrics I couldn’t understand.

The Korean hit single, “Gangnam Style” by PSY was released July 15. Not only is the song catchy, but the upbeat, energetic tune also makes you want to get up and perform the routine from the music video.

This isn’t the typical pop song we hear every day. Yet, the song is very popular. The oddity is that “Gangnam Style” has infected a whole other country with its viral dance moves and its rhythmic beat, and the song’s popularity is only increasing. The YouTube video had over 325 million views by Sept. 30.
PSY’s lyrics describes a dream girl as he prances around and hollers, “Eh-sexy lady!” Strangely, his humorous lyrics seized my attention as well as his bizarre dance moves meant to serenade a woman with his “gangnam” style. His voice, a mixture of confidence, provocateur, and combined with a perfect blend of strangeness and humor, produced the perfect recipe for popularity.

Only later I had discovered the power of this Korean pop song. Not only had the “Gangnam Style” video sprouted popularity among American teen culture, but it also inspired flash mobs in cities around the world, featured in international media and shared on the internet by various celebrities.

“Gangnam Style” quickly toppled the music charts and crushed Carly Rae Jepsen’s “Call Me Maybe.”  It’s fascinating to see that a song whose lyrics make almost no coherent sense to much of its audience could be capable of such popularity worldwide.  The song is proof that we don’t need to understand the lyrics of songs in order to enjoy them, and this is also a reason why teens were so easily influenced by this song.

Although many find this song over-played and cheesy, it’s hard to resist the catchy tune and infectious rhythm. “Gangnam Style” deserves a full five out of five stars for captivating such a massive audience with its components of oddity and humor.