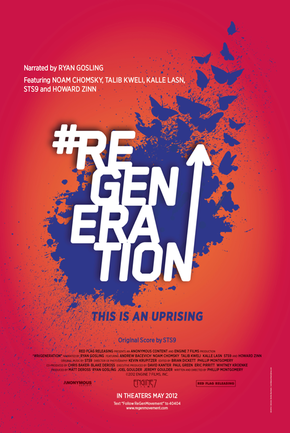 ReGeneration is an award-winning documentary focused on analyzing the future of today’s young adults.  It shows viewers that our generation of young adults is dubbed in the “Me” Generation, where all teenagers care only about themselves.

The documentary bashes self-esteem boosting programs and explains the reason behind the famous Occupy Movement.  Uncovering everything from the news media to the influence education has and how parenting styles have changed, ReGeneration is a must-see documentary.

I thought this documentary was very eye-opening and inspirational.  After its last words,  “Stop hoping for action, and be the action,” I was out of my seat and thinking of the next way I could impact the world.

A concept ReGeneration talks about is our generation’s willingness to help others. According to experts, we have the heart to make a change, but we just don’t know how because nothing major has happened to us yet.

The lack of a major historical movement in the turn of the century also impacts our society. Differing from our generation, the Roarin’ Twenties, Sixties, and Eighties all had their own genres and historical importance. Adults feel that for the moment, teenagers are apathetic and don’t have a movement they want to take action in.

ReGeneration is also about education, naturally relating with students everywhere.  The documentary can make students question what they are really learning in school: Is Christopher Columbus a hero or a murderer? What’s the worth of going to college?

I give credit to ReGeneration for exposing a side of society many teens have not seen before.  However, I still believe in my peers and their abilities to be active in their communities and to build a good future for the next generation.  Change will happen.  The documentary made very good points about many topics and did a fantastic job inspiring activism and involvement.  ReGeneration earns a four of five stars from me. I recommend everyone to join the movement and watch ReGeneration.