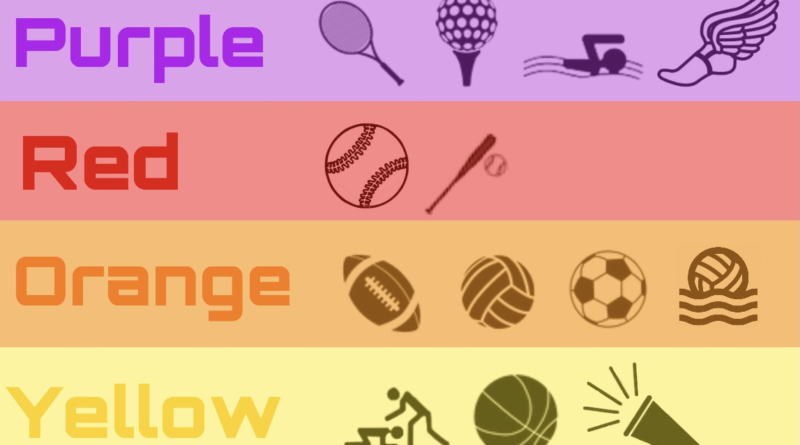 California Interscholastic Federation (CIF), the group in charge of high school sports in California, recently proposed a new plan outlining how to restart athletics this year.  Cross country, track, tennis, swimming, and golf have CIF approval to start as soon as Feb. 1, although the Castro Valley Unified School District has not decided to move forward with restarting sports yet.

The CIFs plan is to hold two seasons, one from January to April, and the other from March to June. Different sports will be allowed based on the level of how bad coronavirus is in specific districts, ranking from purple, which is widespread, to yellow, which is minimal.

Castro Valley is currently placed in the purple tier of widespread coronavirus, which means that CIF will allow cross country, track and field, tennis, swimming, and golf.

This system has created lots of uncertainty amongst athletes and coaches because it means that everything depends on how the coronavirus situation progresses.

“As of right now, soccer is allowed in the Orange Tier. Because of the uncertainty of when the county will move into the Orange Tier, we do not know when the season would begin, end or, if we will be able to have one,” said Vanessa Amaral, the CVHS girls soccer coach.

CVHS staff are getting updates and meeting weekly to plan the return to sports this year. It is unknown when the final decisions about the restarting of sports at CVHS will be made, but CVHS plans to follow the CIF guidelines while trying not to cancel any sports.

Instead of canceling sports, CVHS hopes to try to shorten the seasons in order to have time for all of them in the school year. Once athletics commence, each sport will be given seven weeks to complete their season.

“We are in a wait-and-see mode right now, but we are hoping that we can have as many sports participate as possible with a shortened season. We are doing our best to not cancel any seasons at all,” said Christopher Fortenberry, the athletic director at CVHS.

Some CVHS sports such as football and cross country have already been able to safely start training and physical conditioning outdoors in athletic pods, although they aren’t able to  compete against other schools yet.

If people start to receive vaccinations, continue to wear masks, and socially distance, the virus may slow down and CVHS may be able to return to all sports.

When all sports restart, some things may be done differently than before to ensure the safety of athletes and spectators.

“I could see the allowing of fans at games and the distance our teams can travel for games changing until we are totally safe. In years past, we could play whoever we liked, but now we might be restricted to our own county,” said Fortenberry.

Coaches and athletes are eager to restart athletics, as this season is very important to many, especially seniors.

“I hope that my team and I can get back on the field as soon as possible but in a safe manner. Since it’s my senior year I would like to have some form of a senior night and a few games instead of our originally scheduled 20. I expect to see proper sanitation of gear before and after practice and wearing masks,” said senior Isabel Dueñas.