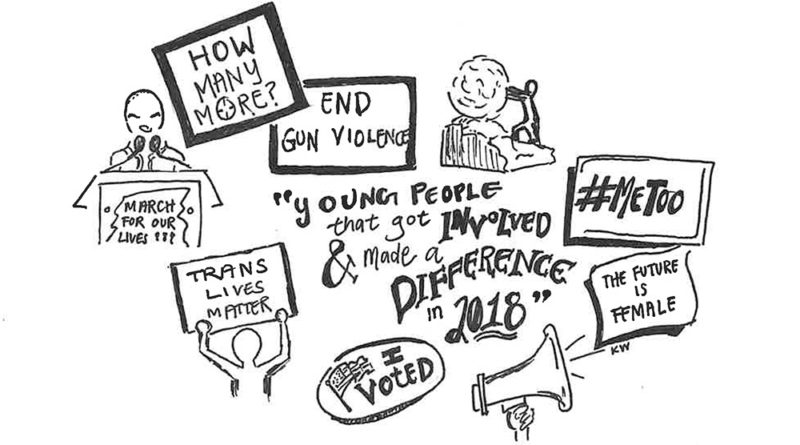 Although 2018 was mostly filled with negative news, there was still positive news that made headlines throughout the year. Young people got involved and made a difference in 2018.

With all the different incidents of gun violence in schools throughout the United States, the Parkland school shooting survivors took a stand and fought for better gun control. The students’ brave and unified stance earned them the International Children’s Peace Prize, which was awarded by Desmond Tutu from South Africa.

Parkland’s activism inspired students from CVHS to follow in their footsteps and have their own protests. Students gathered in the main quad with posters to show their demands for better regulation of guns.  In addition to the gun control rallies and protests at our school, CVHS students also advocated for LGBTQ rights and to end hate. There was even a “Poetry Slam,” where the main message was to end hate. This stance against hate message eventually made its way around Castro Valley, with posters against hate showing up in businesses and homes.

Although most high school students cannot vote, some CVHS seniors and juniors who were already 18, had the opportunity to vote in the primary election this past November. Despite the fact that midterm elections are nowhere near as important as the presidential election, more than 800,000 people registered to vote as part of Voter Registration Day on Sept. 25.

Young people were also involved quite heavily in the “#MeToo” movement and joined  others to voice their opposition to sexual harassment. This hashtag has been used by millions of people from famous voices such as Lady Gaga, Patricia Arquette and Katie Couric to just regular working people, students and anyone who was opposed to sexual harassment. Their stance resulted in the downfall of such famous people as Harvey Weinstein, Kevin Spacey, Bill Cosby, and Larry Nassar and even resulted in the firing or resignation of several key Silicon Valley CEO’s.

The brave new activism shown by young people in 2018 is an example for all of us. Through gun tragedies, hate crimes, and violence against women, young people rose up and banded together to form a strong unified voice, sending a message to the American people and U.S. leaders that they will no longer be silent.

2018 has been the spark for the rise of formerly silent voices. As we move towards a new beginning in 2019, these voices will only continue to get stronger and louder and will hopefully motivate others to get involved and end their silence.