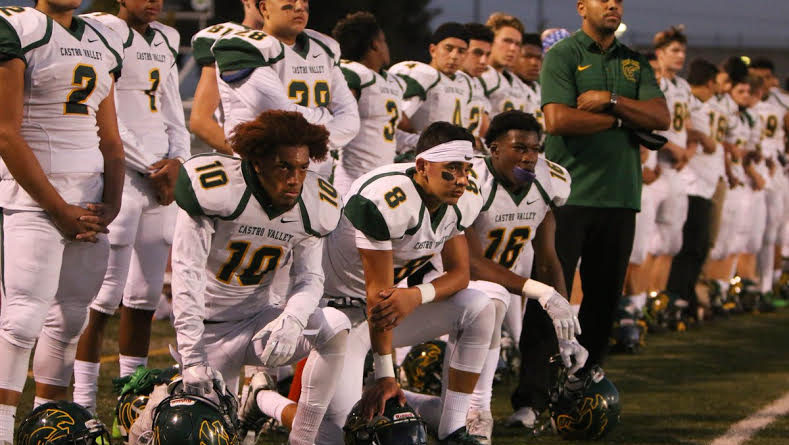 Several football players from CVHS have started kneeling during the playing of the national anthem before games, mirroring a trend across the nation of football players protesting in even greater numbers by taking a knee for “The Star-Spangled Banner.”

Some football players have joined the protest to show what they characterize as their support of minorities facing systematic oppression in America, while many Trojans have remained standing for the national anthem.

“This country is about freedom. I don’t support how they’re carrying out the freedom,” said varsity player and sophomore Marcus Miller, referring to the government.

Colin Kaepernick, former quarterback for the 49ers, started protesting racial injustice in August of 2016 by not standing for the national anthem, but there has been a huge increase in the number of athletes who partake in the protest since President Donald Trump made inflammatory comments about the protesters in late September 2017.

CVHS players who kneel during the national anthem have expressed a variety of reasons for their actions, but they all share a disgust with institutional persecution of people of color.

“We’re not trying to disrespect the country, we’re just trying to stand up for minorities,” said senior Will Sualua, who has been kneeling for the anthem since before Trump’s comments.

The idea of wishing no disrespect on the country was repeated by senior Aaqil Ansar. “It’s got nothing to do with the flag or the country,” said Ansar, who agrees that the protest is simply about showing they do not support what they perceive as regular abuse of all minorities, and adds that for him, it doesn’t have anything to do with Trump.

Not all football players have exactly the same view about the protests however. Jared Gibb feels that the protests do not make sense.

Junior Matt Tognolini does not partake, but finds no fault in those that do. “It’s a personal choice. I don’t think it’s a problem,” he said. He believes that the players feel misrepresented by their government, and sees this form of protest as a reasonable way of expressing that.

There is no consensus on if or when the protests will stop, but multiple football players vowed to continue indefinitely.

There has been much diversity in the way professional football teams have dealt with kneeling during the national anthem. Coach Denny Molzen only offered one statement.

“I would like to show unity as a team in whatever we do but if players want to kneel I wouldn’t/couldn’t stop them or think of them any differently,” he said.

4 thoughts on “#TakeAKnee comes to CVHS”