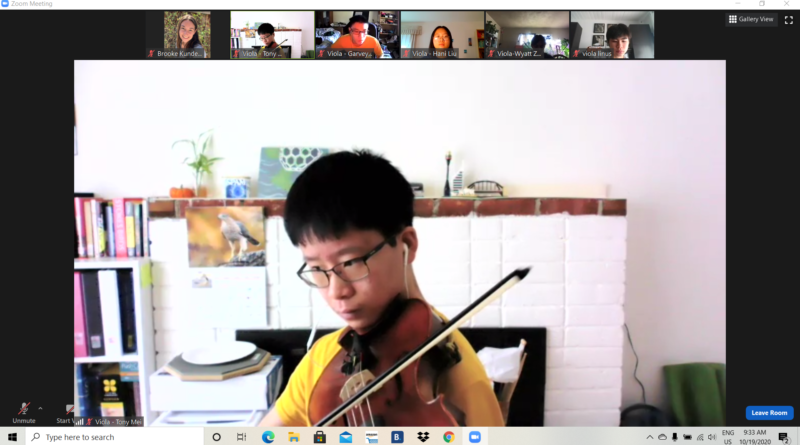 CVHS band and orchestra students are working hard to adjust to virtual learning, practicing and recording during both asynchronous and synchronous learning. In class, students play on their own in sections with their own instrument, then gather as an entire group to rehearse pieces that they are working on.

“The biggest thing is we never hear ourselves together,” said sophomore Autumn Kasl-Godley, and bass player in the symphonic orchestra.

After CVHS decided to go virtual for the 2020-2021 school year in light of the coronavirus, band and orchestra teacher Steven Hendee worked to make it possible for music students, and the color guard, to practice independently. Students practice pieces at home, and eventually record them to be uploaded to SoundTrap, a musical app where each individual is combined in time to make one whole piece. In class, students break into groups based on their instrument to practice with microphones muted and collaborate, to later combine as an entire band/orchestra to practice pieces together.

After students practice at home, their recordings that are uploaded to SoundTrap will be combined to make a lovely piece. That piece will then be uploaded to YouTube, with a compilation of all of the students playing as a visual, backed by the recorded music.

“You have to listen to each other, if you can’t hear each other, how can you play?” asked Hendee, remarking on the social aspect of music, and how virtual learning takes away from that.

Despite the struggles of working on pieces independently, about 250 students are treating band and orchestra with the same reverence as before, even if they have to work a little harder to see things in a new light.

“It’s better than no orchestra,” explained Kasl-Godley, showing the students’ dedication to music and each other.

“We’re used to moving at a much quicker pace. I’m working on two pieces right now, one for marching band and one for wind ensemble, but we would usually be doing at least three per concert,” said senior Sedona Berg, drum major.

Berg isn’t alone in feeling frustrated with virtual learning, especially in a music environment, but students are resilient and take care of each other. “I’ll talk to some of my friends about where they’re at in the piece, too,” said Kasl-Godley.

Concerts and daily practice used to be commonplace, but in this new world we are all working hard to make things as close to normal as possible while still staying safe and protecting those we care about, and band and orchestra is no exception.

Keep an eye out for some charming “concerts” on Youtube of CVHS’s resilient musicians that are sure to come soon. Distance learning is challenging, and band and orchestra students have shown us all that we can work together to make things possible, even if that’s from a distance.

“People crave interaction with other people, and I’ve learned that my class is more collaborative than I ever thought it was,” described Hendee, showing perseverance and teamwork prevail among CVHS band and orchestra students.