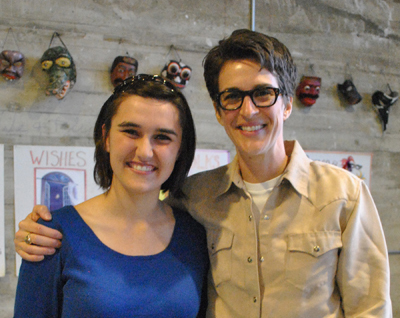 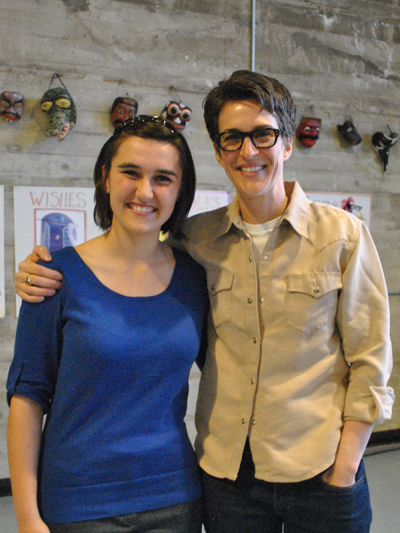 Every student has a moment that defines a high school experience, a moment surely to be looked upon fondly in years to come, a moment etched so deeply in memory so as to never be forgotten.  On April 13, I had the great pleasure of experiencing that moment when I interviewed Rachel Maddow.

I first learned about Rachel freshman year.  I came to know her as the face of “The Rachel Maddow Show” on MSNBC, a hard-hitting interviewer, and an analytical mastermind in the world of political punditry. But it wasn’t until I heard that she was also a CVHS graduate that I began to take extreme interest in her.

How could such an incredible person come from a small town like Castro Valley? How did she work her way up the media ladder to land a job at one of the most famous networks in all of television?  What would she say to students at CVHS if she got the chance?  I yearned to know.  When my journalism advisor Matt Johanson mentioned that he was trying to set up an interview with her, I was jumping out of my seat to volunteer.

For months, it seemed that the interview wouldn’t happen. Trying to pin down a woman who airs an hour-long television program on the east coast every weeknight is not the easiest thing to do.  After numerous emails back and forth between Mr. Johanson and Rachel’s assistant, the opportunity finally arose: Rachel would visit the Bay Area on her nationwide tour for Drift, her new book. The Olympian team immediately started pre-interview preparations:
assigning duties, writing interview questions, and enlisting the help of Olympian alum and Castro Valley Patch editor Analisa Harangozo to assemble a video.

In the days leading up to the event, I became more and more nervous. It was finally setting in that I could have the opportunity to interview one of my idols. Anxious and waiting, I practiced my interview questions incessantly.

When the day of the interview arrived, we drove to Martin Luther King Jr. Middle School in Berkeley, where the book talk about Drift was to be held.  Upon arrival, we didn’t know if we would actually be able to spend more than a few seconds with Rachel. But when her assistant informed us that Rachel was ready to speak right then, we sprang into action.

From the moment I stepped backstage and shook her hand nervously, I realized that there is something unique about Rachel. It isn’t that she has her own television show or that she interviews influential people or even that she has written a best-selling book. It is her persona: the way she composes herself in an articulate, intelligent, and unapologetic manner while still managing to remain down-to-earth and personable. She set my nerves at ease and made the interview seem like a conversation between friends.

We discussed her CVHS experiences, her current job, and the success of her new book, but it was when she explained her appreciation for growing up in the Bay Area that I was truly affected.

“I think that there are a lot of blessings of growing up in California in this time, with a good school to go to, and with all the resources that are available to us,” she explained. “And the more I’ve traveled the world and the more different parts of the country I’ve gone to, the more grateful I am that I am from here.”

Then I realized that we can all learn a lesson from Rachel Maddow. Not only can we idolize her success and respect her achievements, we can recognize that, at the beginning of it all, she was here in Castro Valley. She took advantage of the opportunities she was given in the Bay Area and used that experience to pursue her goals and make a name for herself.  And so can we.

Every time I think about that evening, I feel a profound sense of gratitude and humility to have been in the presence of such an inspiration.  The interview was the defining moment of my education.  And I have never been more proud to say I am from Castro Valley.

One thought on “A defining moment: interviewing Rachel Maddow”