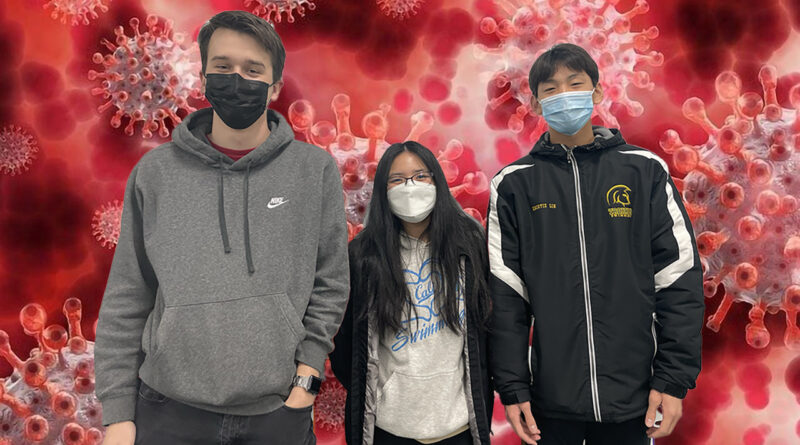 After attending a dinner at her grandmother’s house, Emily Tran fell sick with Covid-19. It was everyone’s worst fear, and now it had happened to her. “I guess it’ll be a fun story in the future to tell people that I survived a pandemic while getting the virus,” she said.

In the month of January, at least 137 CVHS students tested positive for Covid-19. This number is 23 times higher than the monthly average since this school year began. The Omicron variant, along with the continuation of most activities, created a surge in the virus that came closer to home than ever before.

Although cases are on the decline and the coronavirus’ effect on our everyday lives is bound to fade, the experiences held by CVHS students who caught the illness will linger in their memories for the rest of their lifetimes.

Many of the students who tested positive in January contracted the virus during winter break, whether it be from a sports tournament or a family member. Juniors Tran, Nick Pronske, and Jonny Lin were all vaccinated with two shots of the Pfizer vaccine, but no booster. They are a few of countless breakthrough cases that emerged due to the new variant. The juniors tried to be as cautious as possible, but it was often difficult to do so because so many activities were continuing. Despite constant efforts to stay safe, the virus still took its toll.

The students had relatively severe symptoms for three days and mild symptoms for the remainder of their quarantines. While some had it worse than others, the main effects were a cough, runny nose, sore throat, chills, and headache.

“Being vaccinated definitely helps a lot, because the long term effects on my body might have been worse if I wasn’t vaccinated. Some people had irreversible damage to their bodies after, but I didn’t have any,” noted Lin.

A common theme in their experiences was the feeling of isolation. Tran was separated from her family during meals, constantly wore a mask, and slept in her family room. Lin stayed in bed all day and lost motivation to do anything.

“It was pretty lonely, to be honest,” expressed Pronske. His entire family fell sick and avoided each other whenever possible. “We were all down and couldn’t help each other. It was a bit rough. After going two weeks without seeing anybody, I realized just how important connections are.”

Because of their positive tests, the juniors were all absent from school for at least a week. An unexpectedly extended winter break caused them to miss critical time for kickstarting the second semester of arguably the most important school year of their lives.

“A huge downfall was my learning. When I returned, I had three Fs and tests to make up, which was a little discouraging,” commented Tran. “I was eventually able to catch up a couple weeks later, but I had to use up a lot of class, Trojan, and lunch time to completely make up all of the work.”

While at home, the students had to be proactive and contact their teachers to keep up with their studies. Even so, learning is simply not the same without face-to-face communication.

“It was hard to find out what I should have been doing in school,” said Pronske. “I emailed all my teachers and they were very responsive and helped me a lot, but it was still difficult to try and stay up to date when you’re at home.”

In spite of whatever hardships they endured, the students were able to come out of quarantine triumphantly and return to some sort of normalcy. Having the virus and experiencing the thing that has turned our world upside down caused the students to have changed perspectives.

“In a positive light, my big takeaway is that you really don’t fear anymore,” explained Lin. “The virus is another thing that happens today. You feel more confident and unafraid to go back to life before Covid-19. It just kind of feels like: well, I’ve already been through it. So everything will be okay.”

31 thoughts on “Students persevere after COVID”