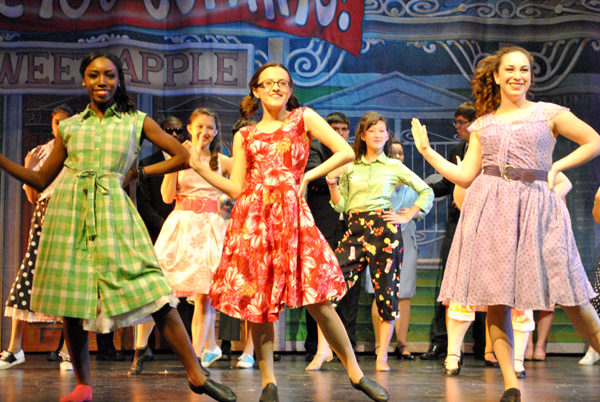 When students stay at school until 10:30 p.m. to rehearse for a musical, it’s obvious they’re devoted. Their dedication is clear the day they present the show, and because of that, they deserve every ounce of praise they get.

This year’s musical, presented by the CVHS drama and music departments, is Bye Bye Birdie, a satire based on American society in the mid-1900s. When Conrad Birdie (a rocker inspired by Elvis Presley) is drafted into the army in 1957, his agent and songwriter, Albert Peterson, becomes insanely worried about his career’s future.

Thanks to the suggestion of his secretary, Rosie Alvarez, they have Birdie do a final publicity stunt: kiss one of the girls in his fan club while singing Albert’s newest song, “One Last Kiss,” on a popular TV show before going into the army. From this story comes a variety of vivacious characters that all come together as their personal lives tie into one another’s.

Even if the storyline may not seem very interesting initially, the show is definitely worth a watch. The talented cast and musicians brighten up the storyline with humor and, at some points, an overwhelming sense of sympathy towards various characters.

Director and CVHS drama teacher David Judson explained why he chose Bye Bye Birdie as this year’s musical: “A show like this has a lot of different things, like dancing, acting, singing, but not too much of either–they’re equal. Because each student has a variety of talents, this year’s musical showcased the talent of the entire cast at all three of these things. There are strong people in both these categories.”

“Each scene had a lot of focusing involved,” said senior Erin Sullivan, one of the double casts for Rosie Alvarez. “But the payoff of the satisfied feeling at the end of each show is worth it.”

When asked how successful he believed the show would be, Judson wholeheartedly responded with positive comments: “Lots of shows are either too easy or too hard, but this one fit our cast just right. This year, the cast is smaller than most, but because of that, they’re extraordinarily close. They all really know how to work together. I am confident that the show will be fantastic. ”

Junior Jessica Kruschke agreed: “Last year for High School Musical, we had a bigger cast and I only knew a few people. I know a lot of people this year. It’s more comforting.”

Make sure to see the memorable show before it says “bye bye.” Bye Bye Birdie is running for two weekends at the Castro Valley Center for the Arts.  The first show premiers Dec. 2, starting at 7 p.m., along with the following Saturday show that also starts at the same time. The Sunday matinée is at 2 p.m. The same schedule repeats the following weekend. Tickets range from $10 to $20 and can be bought on CVUSD’s website on the Center for the Arts’ calendar.