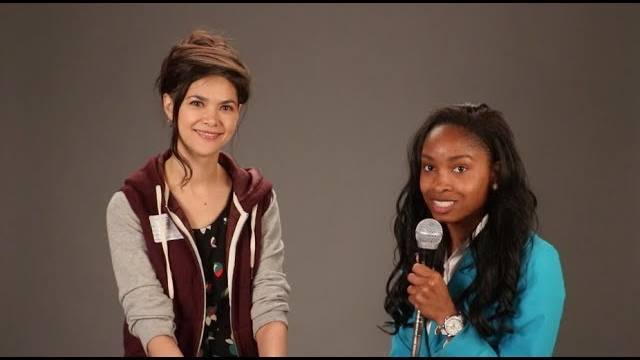 Lilan Bowden, star of Disney Channel’s show Andi Mack, returned to her roots lately. The actress and comedian graduated from CVHS in 2002. In a special Olympian interview, Bowden spoke about her high school experiences, her Hollywood journey, and her new Disney show.

Q: How does it feel to be back in high school?

A: It’s very strange and cool being back because as I look around there’s so much that has changed. A lot of it feels eerily the same. As I was walking over here I saw a girl open her locker and there was a Wild 94.9 bumper sticker in it and I thought I was looking into my own locker.

Q: What are your favorite memories from CVHS?

A: I was really involved in the Improv Club and Comedy Club in high school. A lot of my favorite memories are about those shows. I joined my sophomore year. By my senior year it became a huge thing. And The Olympian was so much fun, I got to be photo editor.

Q: How has your Bay Area upbringing influenced your Hollywood journey?

A: In the Bay Area there’s a lot of diversity. I feel fortunate that I was able to have a diverse group of friends. When I went to Hollywood I was able to take that collection of experiences with me and that has influenced my comedy and what I bring to the screen.

Q: Your show Andi Mack is about a non traditional family. Why is it important to portray those kinds of families on television?

A: Andi Mack is a really important show because it’s a real family and it’s a diverse family. Disney Channel is trying to show that families come in different forms and every family is important. Also because it’s an Asian American family, it’s really cool to see different types of representation on television.

Q: In an interview that you said “You can be diverse, female and the show can be about you.” What qualities does it take to break the mold?

A: A strong work ethic is more important than being naturally talented. To be able to face that challenge and keep going is the most important quality to have to carve out a career.

Q: How important is it to maintain a connection with fans on social media?

A: While I don’t have time to respond to every single person individually, I like to comment back. I’m touched that a person out there is moved by the thing that I’m doing. I want to let them know I care about them as people.

Q: What other projects do you have coming up?

A:  I just finished shooting a YouTube series called Lifeline. It’s a sci-fi series. I’m in the current season of Love for an episode. Other stuff that I have going is in LA. I perform live sketch comedy and improv on a regular basis.

Q: Any advice for aspiring stars of CVHS?

A: Enjoy your time here. Cherish your teachers and your classes. Indulge in the programs here. If you’re an aspiring star with a dream, do not give up. It’s not a sprint, it’s a marathon. You will face rejection but do not let that stop you.