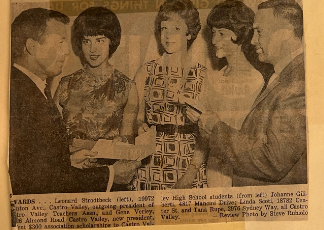 Under years of dust in the library’s archive lie a series of leather scrapbooks with the lettering “CV” etched on them. Uncovered by librarian Angela Anthony and Olympian advisor Matt Johanson, the scrapbooks include original flyers and newspaper clippings from the early days of CVHS.

“We have an archive of all the yearbooks and everything going back to the start of the school. [The scrapbooks] have been living in the library this whole time,” said Anthony.

The scrapbooks speak for themselves, revealing a past that hasn’t been touched in many years.

Many things have changed around CVHS. At that time, CVHS was one of the two high schools in Castro Valley, the other being Canyon High School (now Canyon Middle School). CVHS’ mascot was the “Spartans,” and the school paper was called The Achean.

Buildings around CVHS were also named differently, going by letters instead of numbers.

Marriage after high school was also the norm, and weddings were written in the news.

Castro Valley was a close knit community, where everybody knew each other. News articles included the home addresses of the people they featured.

Seniors made a “Senior Will,” outlining what legacy they wanted to leave behind at the high school.

Although much has changed, some things have remained the same. Many of the locations depicted in photos look the same today. Below, Larry Downs and Bonnie Belden stand in front of one of the brick pillars in front of the 100 hall.

These scrapbooks will be saved for future generations of CVHS students.

“It is behind lock and key in the archive room in the library,” said Anthony.

One day, future CVHS students may look back at archives from 2022 and see how much things have changed then.